Discover the world of the Breitling watches online.

The winged B logo has always served as a symbol for first-class quality. Generations of pilots have been relying on robust Breitling watches. In water or on land - Breitling is the first choice for admirers of chronometric precision. Founded in 1884, the independent company is one of the most successful brands in the history of the Swiss watch industry. 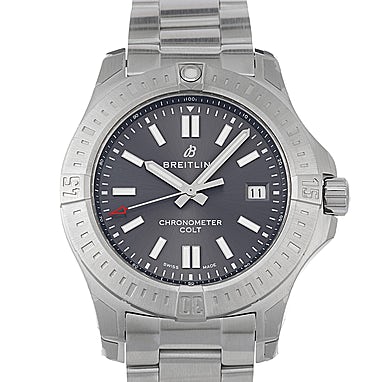 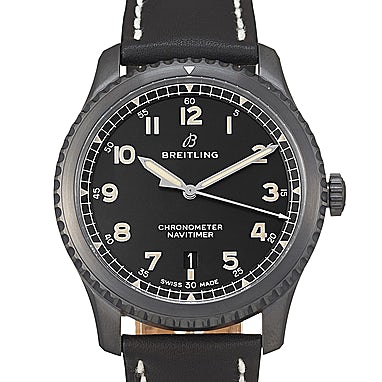 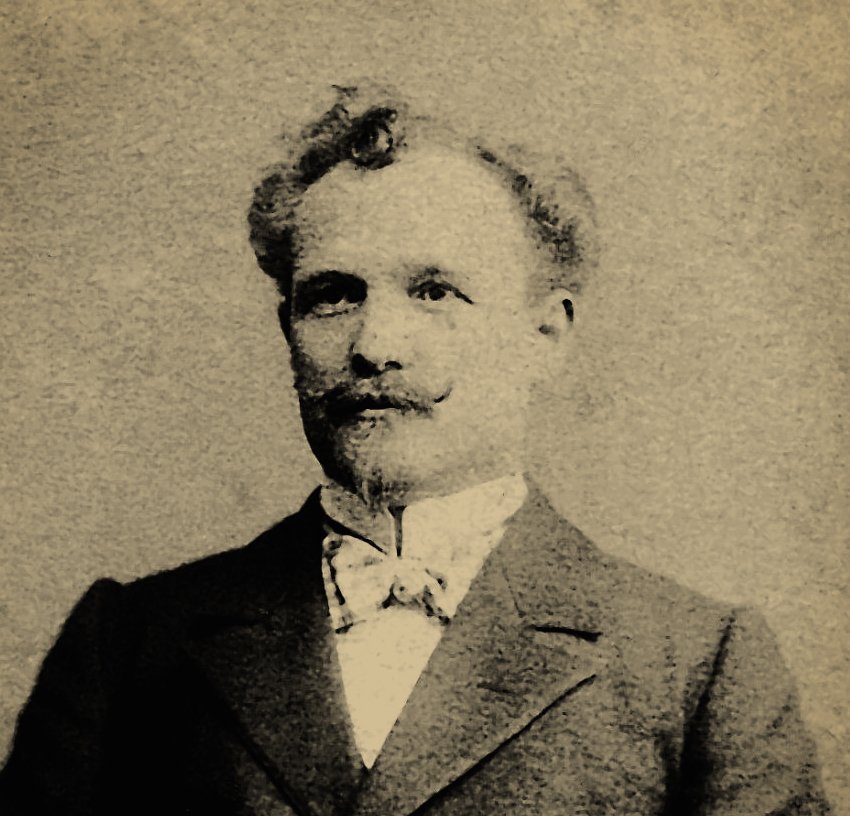 Watch manufactory with a tradition

Precision and first-class performance since 1884

Robust, precise, and charismatic: Breitling watches pride themselves on their legendary designs and excellent quality. Popular among pilots, top athletes, and the stars of the silver screen - Breitling watches enjoy a high recognition value. The Breitling business logo - the winged B-initial - clearly shows the connection of the watch manufacturer with aviation. Breitling was established soon after the first successful flight in world history: in 1884, Léon Breitling founded his watch workshop in the Swiss Jura Mountains.

Like many of his generation, Léon Breitling was fascinated by racing and speed, and he, therefore, devoted himself to creating the best stopwatch on the market. Since then, Breitling has specialized in the production of high-quality chronographs and has been able to make major contributions to further the development of short-term measurement. In 1923, Breitling presented the first watch with independent chronograph pushers; until then it was common practice to operate a stopwatch through its winding crown. In 1934, with the introduction of a second pusher that could reset the stopwatch to zero, Breitling created the face of the modern Chronograph. Two pushers and a crown - what every watch enthusiasts takes for granted today goes back to the ground-breaking innovation by Breitling.

The sky is not the limit for Breitling

Combining tradition and innovation: as a family-run company, Breitling rose to fame to become one of the most important watch manufacturers worldwide. Under the leadership of the founder’s grandson, Willy Breitling, the manufacturer aimed for the sky. It is no surprise that Breitling’s chronographs have made a name for themselves in aviation. Launched in 1936 was a chronograph that was manufactured for aircraft cockpits and was used by numerous aircraft manufacturers. This chronograph earned Breitling a contract with the Royal Air Force as well as the United States Air Force. The Chronomat presented in 1947, as well as its sophisticated successor, the Navitimer, helped Breitling become firmly established on the wrists of pilots. The circular slide rule has been a main feature of the Navitimer to this

Launched in 1936 was a chronograph that was manufactured for aircraft cockpits and was used by numerous aircraft manufacturers. This chronograph earned Breitling a contract with the Royal Air Force as well as the United States Air Force. The Chronomat presented in 1947, as well as its sophisticated successor, the Navitimer, helped Breitling become firmly established on the wrists of pilots. The circular slide rule has been a main feature of the Navitimer and helps carry out calculations with the simple rotation of the bezel. Time, speed, distance, and fuel consumption - the Navitimer became an indispensable tool that accompanied generations of pilots.

But the Navitimer did not only attract attention in aviation: in 1962, the special model Cosmonaute accompanied Scott Carpenter, one of the seven astronauts of the legendary Project Mercury, to outer space. Carpenter asked Breitling to develop a special edition of the Navitimer with a 24-hour display for his mission so that he could read the exact time and distinguish between night and day in outer space. The sky was no longer the limit - Breitling was now reaching for the stars. 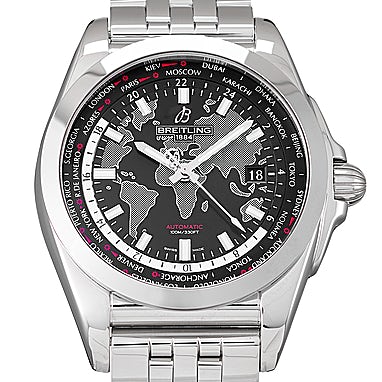 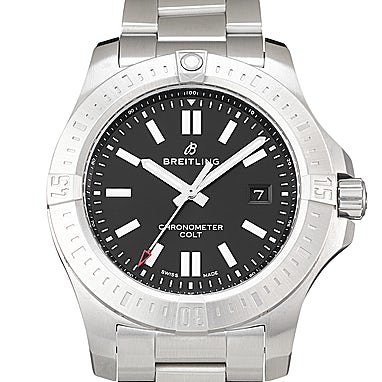 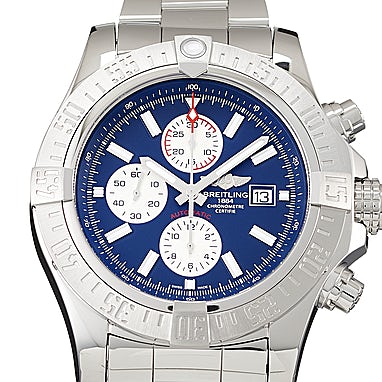 Anticipating the client's every need: in the 1960s, the demand for a chronograph with a self-winding mechanism became increasingly clear. Driven by their innovative spirit, Breitling and three other manufacturers initiated the top-secret “Project 99”. The result achieved unprecedented success in 1969: the automatic chronograph movement was presented at the same time in Geneva, New York, Hong Kong, and Beirut and caused a sensation all over the world. The watchmaking creation was named Chronomatic, emphasising the ground-breaking combination of chronograph and automatic movement. The range of the Chronomatic included several calibres: Calibre 11, Calibre 12, Calibre 14, and Calibre 15. Breitling installed the movements in numerous new models: Chronomatic, Co-Pilot Automatic, Chronomat Automatic, and Automatic Navitimer. As a result of this brilliant achievement, Breitling manifested as the master of chronographs. 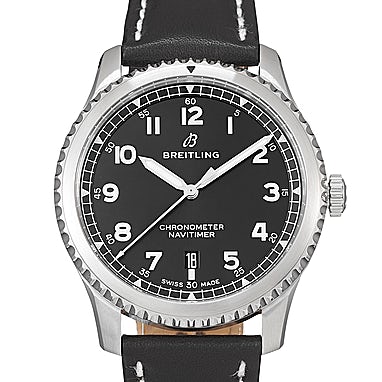 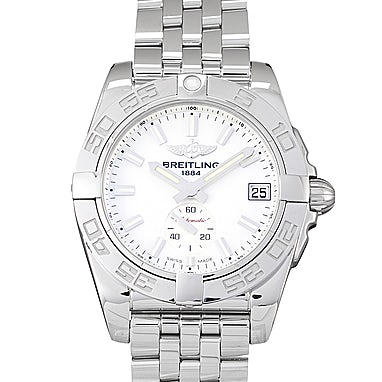 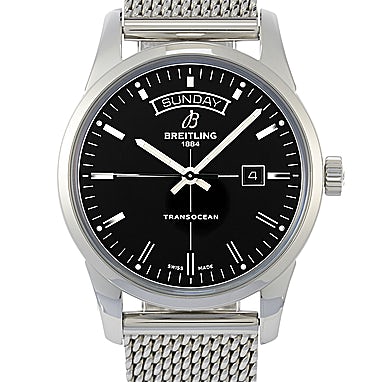 Not even a giant player in the watch industry such as Breitling could elude the Quartz Crisis: Willy Breitling had to close the company in 1979.

Rescue came only a few years later when skilful engineer and ardent amateur pilot, Ernest Scheider, acquired the trademark rights and moved the company to . Under his confident leadership, Breitling achieved fame once again and was able to steer clear of the Quartz Crisis by incorporating the best of both hemispheres in the world of watches. A new Chronomat was presented in 1984, which would soon achieve cult status thanks to its famous rider tabs, bold design, and outstanding functionality.

In 1995, Breitling once again proved its innovative spirit with the Emergency. This new electronic watch was equipped with a dual frequency Personal Locator Beacon, which allowed its wearer to communicate their location via the dual frequency transmitter, if and when the need to do so arose. The decade-long cooperation between Breitling and aviation achieved a new, joint success with the addition of the Emergency.

In the year 2000, Breitling devoted itself to unprecedented precision: all wristwatches produced since then have been awarded the COSC-certificate (http://www.cosc.ch/), which officially guarantees the accuracy and reliability of the movements. Another long-expected step was followed through in 2009: Breitling’s own chronograph calibre B01 was successfully launched. Today, numerous Breitling models are equipped with manufacture movements, demonstrating the great skill of the manufacturer whose current headquarters have found their way back to La Chaux-de-Fonds.

Today, Breitling is one of the few independent and successful watch manufacturers worldwide. Due to their reliability and functionality, Breitling watches have established an unrivalled fan base around the world.

The beautiful world of watches

Breitling does not only produce excellent pilot watches, but also supports aviation with many impressive projects: the company is the main sponsor of the renowned Reno Air Races. Furthermore, Breitling has its very own aerobatics team: the Breitling Jet Team draws thousands of spectators to international shows where they constantly keep them on the edge of their seats. Breitling does not want to limit itself to pilot watches - the anchor in the brand logo symbolizes the close connection with the world of water. With the popular model Superocean, Breitling found its way into the hearts of both professional and amateur divers. Not to mention that the Swiss watch manufacturer also delights on the racetrack: the company has been cooperating with the car manufacturer Bentley, since 2002. The watch collection Breitling for Bentley offers a wide range of solid watches that meet the high demands of both luxury brands. The face of this cooperation is none other than David Beckham. It is not only the football legend that represents the charismatic Breitling men’s watches: the actors John Travolta, Leonardo DiCaprio, and Harrison Ford are among the famous clientele of the company from . Reaching for the stars, Breitling climbs the highest peaks of chronometry - always staying true to its impressive history and tradition.