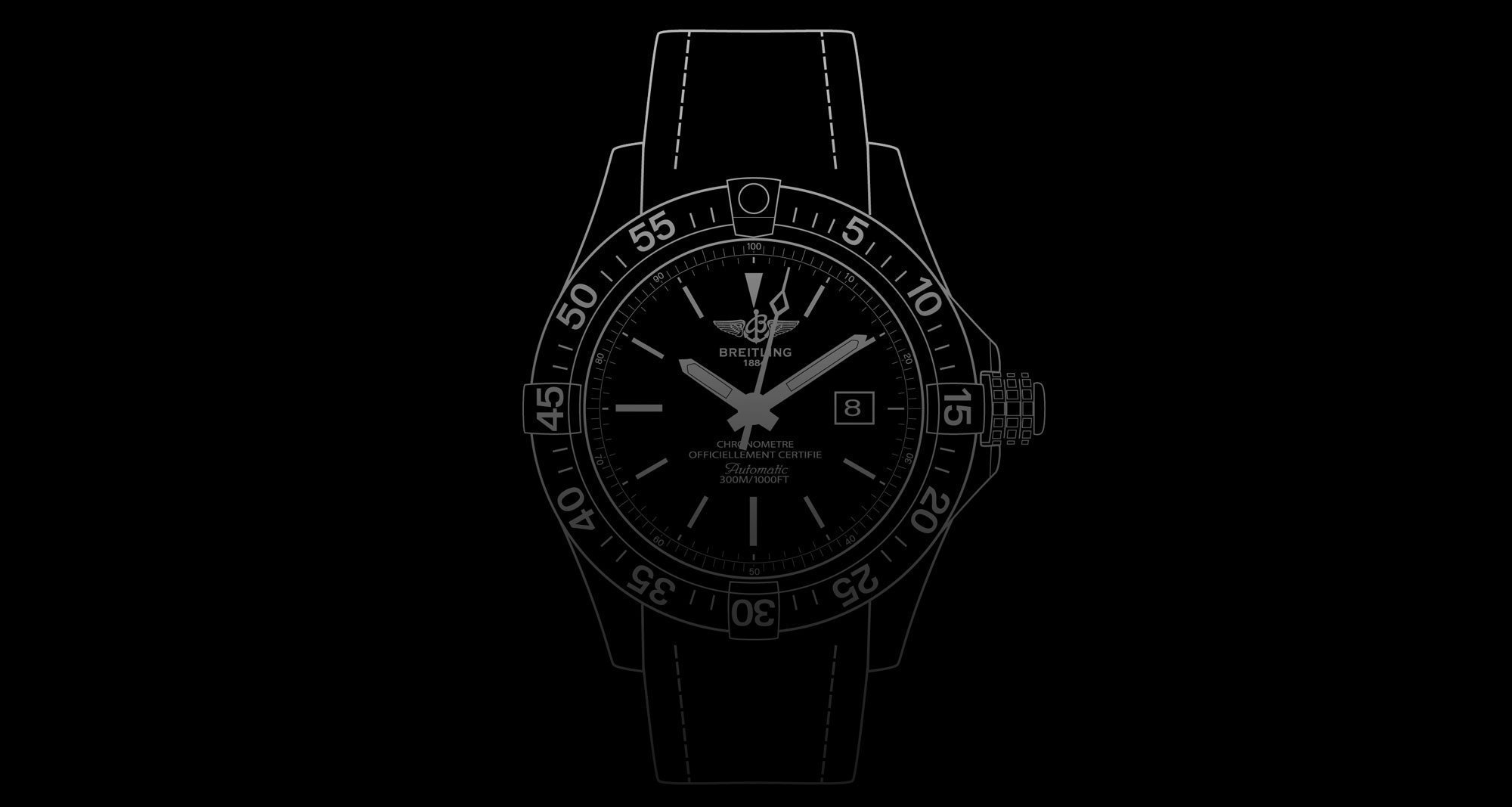 Elegant in black: the Breitling Blackbird has always been highly valued by fans of precise movements and monochrome black hues. When it comes to the Blackbird wristwatch, Breitling combines outstanding technology with a bold design that attracts those who have been loyal to the brand for many years as well as new and intrigued clientele. 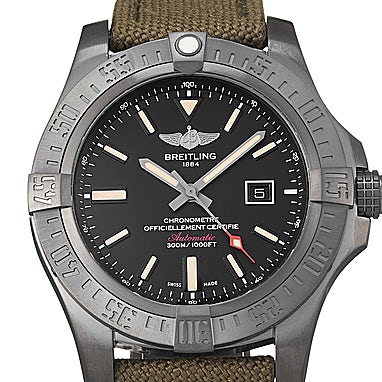 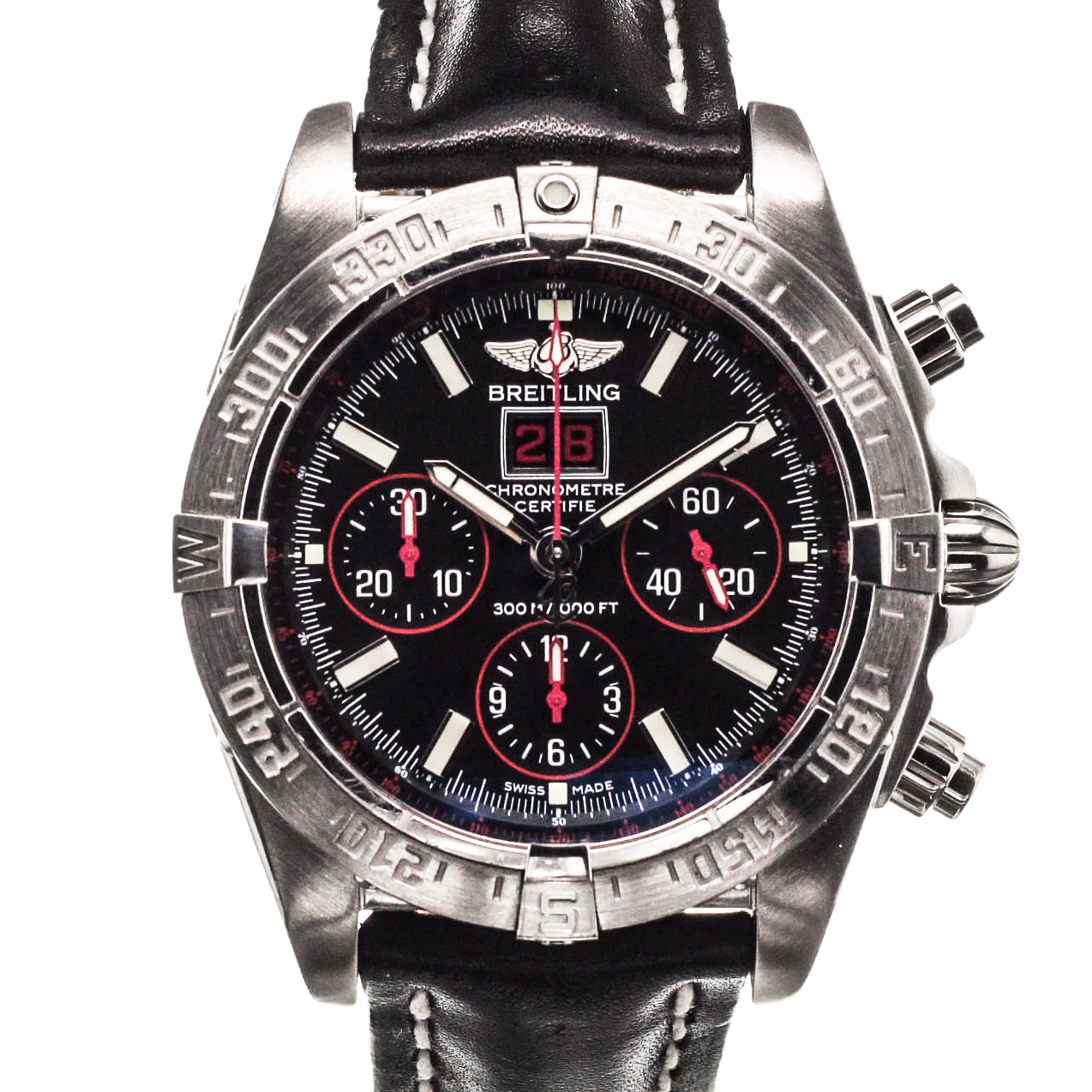 The black star by Breitling

A strong statement in black: the Breitling Blackbird offers solid robustness, practical functionality, as well as a technical-modern design. Its characteristic feature is most certainly the black watch face that adds special enchantment to the typical Chronomat series.

Named after the legendary reconnaissance aircraft Lockheed SR-71 “Blackbird”, the watch was originally developed as a pilot watch but has not surprisingly found many supporters amongst watch enthusiasts outside of aviation.

Undercover with the Blackbird: compared to the Breitling Chronomat, the Blackbird exudes a stealth profile and is thus reminiscent of the eponymous aircraft. In spite of this simplicity, the Blackbird highlights the best qualities of Breitling watches. The distinctive features occur throughout all generations of this men’s watch launched in 1995 - both new and second-hand models of the Blackbird are a pleasant sight.

The first generation of the Breitling Blackbird

A member of the Breitling Windrider watch family

Breitling presented the first Blackbird in 1995. The design and reference numbers (Ref. A13350, Ref. A13050, Ref. A13353) of this first edition indicate that the Blackbird belongs to the Chronomat line and is, therefore, also a member of the Breitling Windrider watch family. The kinship between the Chronomat series is also evident in the Reiter-bezel as well as in the black watch face. In order to emphasize the noteworthy status of this first edition, the Breitling dial is transcribed with the red writing, “Serie Speciale”, and the name, “Breitling Blackbird Automatic” at three o’clock. From the very beginning, the Blackbird was created with a functional purpose - thus its design is kept technical and simple.

The Blackbird from Breitling

A legendary aircraft and an exceptional pilot watch

The Blackbird was named after the famous military aeroplane Lockheed SR-71 “Blackbird”. The strategic reconnaissance aircraft was operated by the U.S. Air Force from 1966 until 1998 - today, the aircraft can only be admired in museums. The fearless spirit of the SR-71 is embodied in all wristwatches from the Breitling Blackbird series. The Blackbird Lancaster edition (Ref. A13353) - launched in 2001 and limited to 60 watches - commemorates another aircraft. Breitling presented the watch to mark the 60th anniversary of the British WWII heavy bomber Avro Lancaster that first took flight in 1941. Today, the first generation of the Blackbird, as well as the Lancaster special edition, can only be purchased second-hand - nonetheless, these watches are undoubtedly a highlight in Breitling history.

The models of the Breitling Blackbird series

The matte case of the Breitling Blackbird radiates robustness and distinguishes the timepiece from other Chronomat models. Case, crown, horns, and bracelet - all metal parts of the watch are provided with a matte finish. This special feature also encompasses the later generations of the Breitling Blackbird including the Blackbird with a large date display launched in 2007 (Ref. A44395), and the special edition with red accents on the dial presented in 2012 (Ref. A33360). Supporters of Breitling are simply delighted by the precise automatic movement with a chronograph function, the robust case, and the striking black watch face. Today, the two models are no longer in production but can still be found on the second-hand market.

The new look of the Blackbird - The Avenger Blackbird

In 2014, Breitling surprised the world with a reinterpretation of the original Blackbird.The new men’s watch with a 48-millimetre titanium case belongs to the Avenger watch family and shares the name with the original watch from 1995. The all in black concept was taken to the next level with the Avenger Blackbird (Ref. V1731010). The matte case with a diamond-like carbon (DLC) coating, the watch face, and the textile strap are all manufactured in a coal-black hue. This Blackbird model waives the chronograph function and the dial, therefore, delights with unique simplicity. The robust design of the Avenger Blackbird complements the water resistant function of the watch, which is waterproof to 300 metres. The titanium case lives up to its promises - it is strong yet light at the same time. The military strap is made of a highly resistant fabric and can endure the most extreme missions while ensuring superb comfort wearability.

A watch to be worn throughout the seasons

The earlier models, the later special editions, or the new Avenger - those who want to complete a black-on-black ensemble can find an exceptional match with the Breitling Blackbird. The Blackbird, which is a member of the Chronomat family (e.g. Ref. A13350, Ref. A44359, Ref. A44360), can only be purchased second-hand. The prices for these models vary, and with special editions like the Lancaster Edition (Ref. A13353) that are hard to come by, the higher prices are justified. Those who invest in a Breitling Chronomat Blackbird can be sure to have purchased a reliable and exceptionally precise watch. The appeal of the Breitling Avenger Blackbird (Ref. V1731010) lies in its robustness and precision - making it popular with watch enthusiasts in spite of its youthful existence.