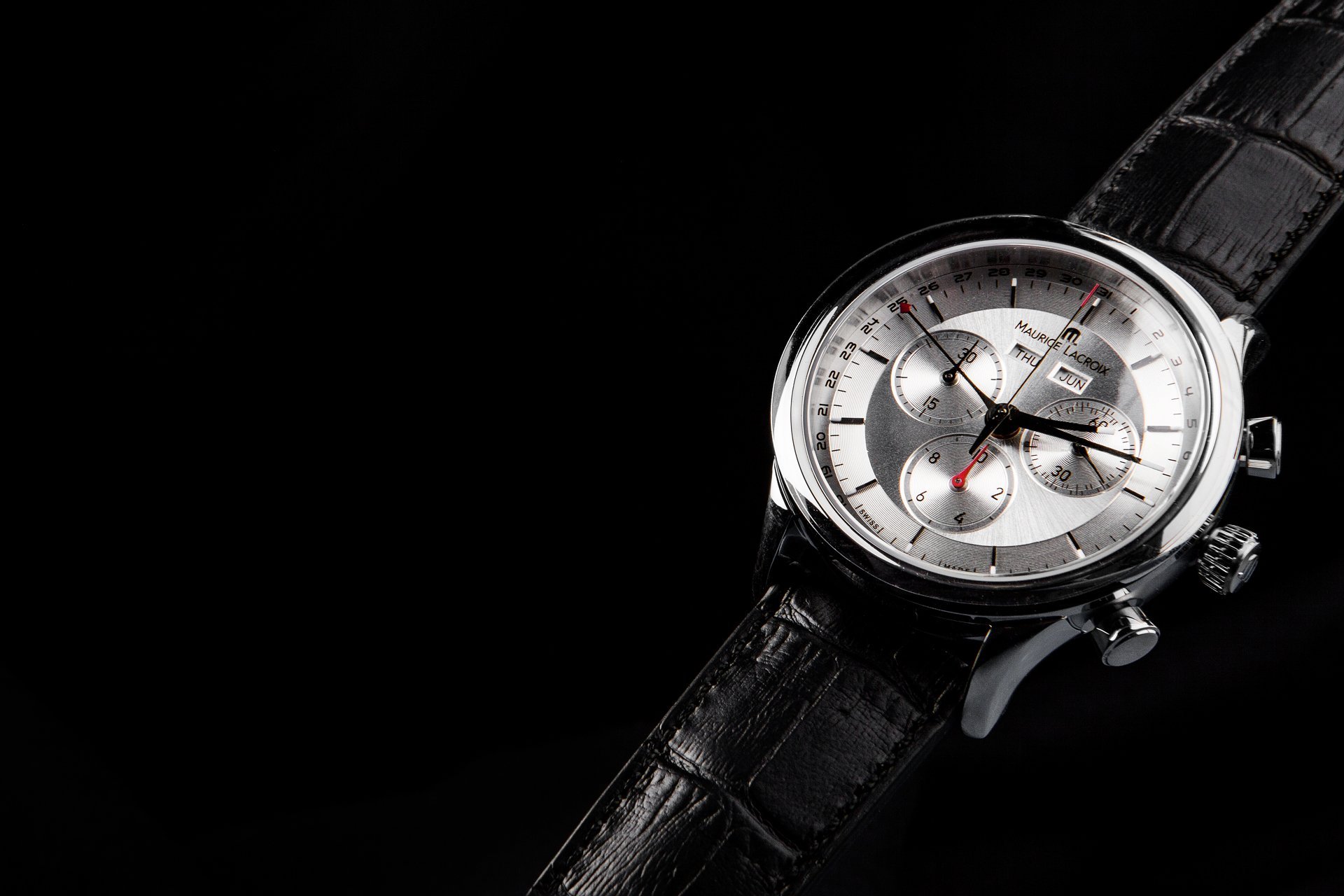 Discover the world of the Maurice Lacroix watches online.

Through the distinctive production of timepieces for over 40 years, Maurice Lacroix has come to stand out for bold innovation and exceptional quality. The company is not afraid to produce innovative concepts and creative solutions and as a result, they have come to obtain an excellent status in the world of watches. The timepieces by Maurice Lacroix embody their own character and are recognised and appreciated around the globe. 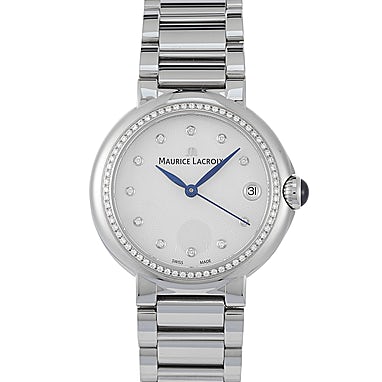 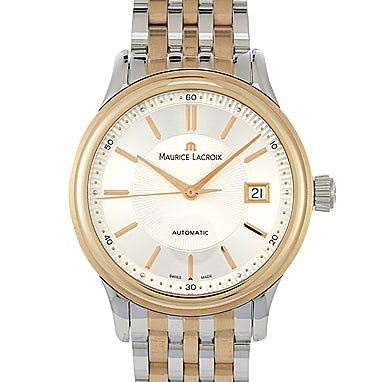 Timepieces with a twist

The relatively young company has managed to create masterful watches since 1975. Furthermore, Maurice Lacroix has impressively established its own identity and secured a firm foothold in the world of fine watches. Maurice Lacroix is a diverse name that combines traditional craftsmanship with international spontaneity, sporty athleticism with elegant chic, and mechanical manufacture calibres with precise quartz movements.

The Swiss watchmaker Maurice Lacroix manufactures their timepieces in two separate production facilities located in Saignelégier and Montfaucon. Half of the watches produced by the house are equipped with mechanical movements – most of which are produced in-house. Despite the company’s high level of vertical integration and the numerous awards that have been bestowed upon their timepieces, Maurice Lacroix creations are relatively affordable instruments that appeal to both watch experts and amateur watch enthusiasts alike. The unique design languages of the watches combined with their sophisticated technical details define Maurice Lacroix models as masterpieces of watchmaking. The superb timepieces leave nothing to be desired and simply convince both ladies and gentlemen alike.

The Swiss watch with the "M"

Established in 1975 in Saignelégier, Switzerland, the company launched its first timepiece the same year and named it the Maurice Lacroix. During the development of the watch brand, the company’s namesake passed away. He was a highly valued member of the Board of Management, whose heart and soul was completely engulfed in the creative process of the Maurice Lacroix Company. In his honour, the founder of the company, Dr Peter Brunner, together with his business partners, chose to name the watch company in his honour.

In the years following, Maurice Lacroix gained popularity in the watch loving world and positioned itself successfully as a producer of high-quality Swiss watches. The company’s motif – the stylised “M” – provides a high Maurice Lacroix recognition factor that continues to strengthen with each passing day. 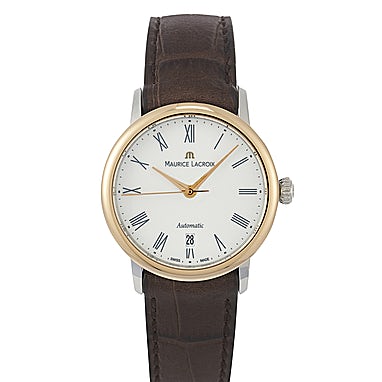 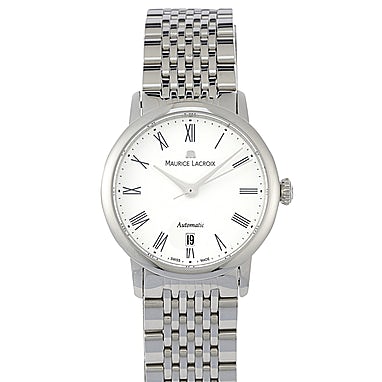 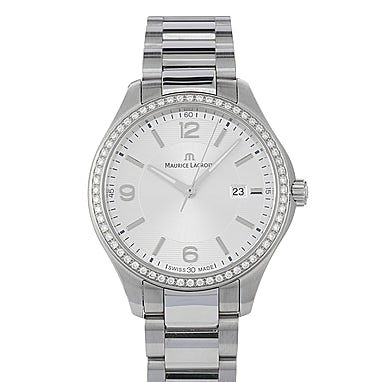 The development of an in-house produced calibre is an exquisite feature in the watch industry. Only when a company produces its own movement can it be referred to as a manufactory. Not surprisingly, Maurice Lacroix now proudly wears this title. In 2006, the company entered into a short, three-year collaboration with the ingenious watch designer Andreas Strehler. Together, they designed the first completely self-designed chronograph calibre ML 106, which was immediately fitted in the Masterpiece Le Chronographe.

The following year, Maurice Lacroix presented the chronograph calibre ML 128, which impressed with a revolutionary memory function. The exclusive calibre was placed in the Mémoire 1. The timepiece is surprisingly only equipped with two standard hands. The same pair of hands carry out both the time and chronograph function. The crown integrates a button that, when pressed, changes the mode of the timepiece from “time” to “chrono”. Thanks to the memory function, the user of the watch can switch back to “time” mode while the chronograph mechanism is still running. The Mémoire 1 is certainly a luxury timepiece, as only 20 copies of the instrument are circulated each year. The technical finesse of the calibre was honoured in 2008 with the “Goldene Unruh", which is one of Germany’s most prestigious awards in watchmaking. 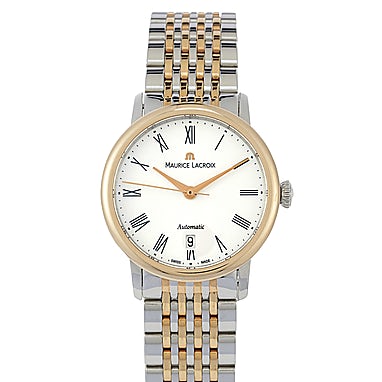 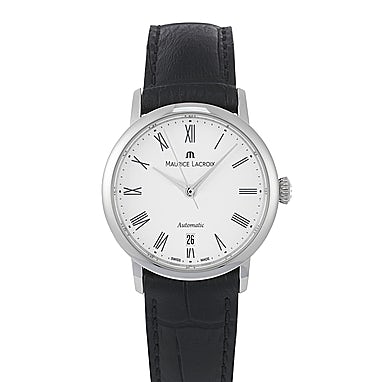 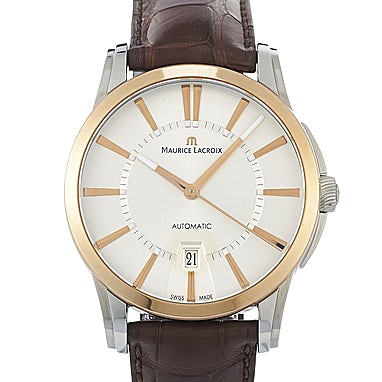 From Pontos to Miros

The four pillars of the Maurice Lacroix brand include craftsmanship, innovation, design, and independence. The brand forms a sturdy bridge that brings together tradition and modernity. The goal: watchmaking masterpieces that exude a distinctive and unique design.

The manufactory has impressed with their quality workmanship and their use of exquisite materials. The Miros Chronograph (Ref. MI1028-SS002-130) especially convinces with striking aesthetics. The timepiece is designed with an outsize date and a small second subdial. A particularly exclusive timepiece from the brand is the Les Classiques Date Gold (Ref. LC6037-PG101-130), which is fitted with a high-grade crocodile leather strap and a luxurious rose-gold case. Whether it is the Miros, Eliros, Les Classiques or Pontos collection, the contemporary designs of Maurice Lacroix timepieces along with their innovative mechanics, make the creations from the brand highly sought after watches.

Although the brand is highly celebrated for providing entry-level watches that are predominantly equipped with quartz movements, Maurice Lacroix also manufactures collections that shine with horological finesse. The Masterpiece collection combines mechanical dexterity with a high-quality exterior.

The collection was launched in 1990 and has always focused on mechanical timepieces brimming with innovative technical details. For instance, the Masterpiece Squelette (Ref. MP7228-SS001-000) turns heads with a very distinctive aesthetic. The “skeletonization” of a movement is a painstaking process. It requires none other than great skill and absolute precision from the most talented of watchmakers. The Masterpiece Squelette, therefore, represents a tribute to the traditional art of watchmaking and provides the timepiece with a modern take on the “skeletonization” process.

The Pontos is considered to be one of the most popular models from Maurice Lacroix and is a timepiece that is characterised by a modern and sporty design. The watches from the collection are simply universal, meaning that they can be paired with a jean leather combo just as well as with a sleek leather jacket. The Pontos collection beautifully blends technical exactitude with artistic creativity in a breath-taking manner.

In 2012, Maurice Lacroix presented the exceptionally sporty chronograph Pontos S (Ref. PT6008-SS002-332). Optionally equipped with a steel bracelet or a comfortable and hypoallergenic nylon strap, the sporty chronograph attracts divers and other sports enthusiasts. With a majestic diameter of 43-millimeters, the model guarantees a bold statement on the wrist. Furthermore, the timepiece is water resistant up to 200 metres. The unique shape of the crown along with the 2 surrounding pushers ensure a firm grip and further emphasise the distinctive character of the chronograph. Finally, the elaborate chronograph is made complete with a precise self-winding movement.

A precise attention to detail

Women’s watches play a significant role when it comes to the Maurice Lacroix collection. The company has managed to cater to the wrists of ladies just as successfully as to the wrists of male clientele. A particularly impressive ladies line is the Les Classiques, which is characterised by flawless simplicity. The Les Classiques Ladies Date (Ref. LC1113-SS001-130) is a very popular model that comes equipped with quartz movement. Another distinctive model is the Les Classiques Phase de Lune (Ref. LC6057-SD501-17E) that triumphs with a moon phase display and a mechanical calibre.

The Miros Ladies Date convinces with sophisticated aesthetics. The casing is comprised of 18-carat rose gold and is characterised by fluid and elegant curves. In addition, the Rectangular Fiaba (Ref. FA2164-SD531-118) is featured with a rectangular case and a concave case back that perfectly nestles onto the wrist. The Eliros Date Ladies (Ref. EL1084-SS001-811) on the other hand, offers a retro-chic charm. Particularly accentuating is the sunburst dial displayed in silver, anthracite grey, or black. Last but not least is the distinctive Star Side Eternal Moon (Ref. SD6107-SD501-15E). The timepiece was presented at Baselworld 2014, which among many other features, is adorned with a luxurious diamond-set bezel.

Maurice Lacroix enjoys an exceptional reputation in the watch world and has single-handedly won over several famous ambassadors. Known friends of the Maurice Lacroix include the Australian world-class swimmer James Magnussen and basketball coach Lucas Mondelo, just to name a few. The two outstanding sports talents reply on the high-quality timepiece from the Pontos Series. In the world of cinema, Maurice Lacroix is represented by actor Ray Stevenson and Jamie Bamber. The two players sport their stylish timepiece from Maurice Lacroix during their rare free time.

Further individuals who have been inspired by Maurice Lacroix collections include influential individuals like Movember CEO Adam Garone or advertising photographer Blair Bunting.